She Who Walks on the Sea 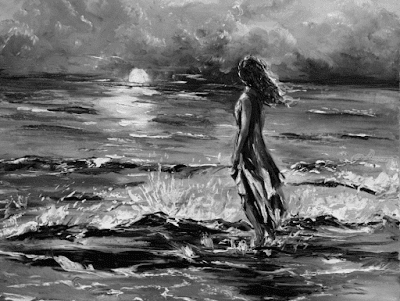 “Asherah, ancient West Semitic goddess, consort of the supreme god. Her principal epithet was probably “She Who Walks on the Sea.” She was occasionally called Elath (Elat), “the Goddess,” and may have also been called Qudshu, “Holiness.” According to texts from Ugarit (modern Ras Shamra, Syria), Asherah’s consort was El, and by him she was the mother of 70 gods. As mother goddess she was widely worshiped throughout Syria and Palestine, although she was frequently paired with Baal, who often took the place of El; as Baal’s consort, Asherah was usually given the name Baalat. Inscriptions from two locations in southern Palestine seem to indicate that she was also worshiped as the consort of Yahweh.“

The second sentence strikes me as significantly profound. The Semitic people of Jesus’ time were familiar with Asherah, even though she had been evicted from temple worship and expunged from their scriptures 640 years before Jesus lived by King Josiah and the Deuteronomist priests.

The history of the worship of this goddess, and her rejection by those in authority, can be read about in the book The Mother of the Lord by Margaret Barker. Barker lays out how plain it is that Enoch's insistence that the Deuteronomists rejection of Asherah (abandoning Wisdom) was the likely reason why the Book of Enoch was not canonized, and why the Deuteronomists did everything in their power to erase both that book's existence.

This attempted erasure of The Lady (and of Enoch) has been largely successful. Christians largely ignore her. And Mormons, who supposedly embrace the idea of “Heavenly Mother”, for the most part follow suit.

There are certainly some small pockets of LDS and post-LDS people (mostly women) who will speak/write of her openly, but the original effort to blot her out of our minds and our discussions is pretty much still respected and upheld by those who profess to desire the Kingdom of God on the earth.

But imagine trying to understand the meaning of Jesus walking on water without considering Heavenly Mother’s reputation as “she who walks on the sea”. It won't be difficult to imagine at all, because almost no one associates that miracle with her.

We have misunderstood Jesus for so many years. He wasn’t merely performing a miracle for the sake of his disciples. He was paying homage to her in a way that his disciples would have understood as a serious rebuke of those who had removed her from the Holy of Holies.

She used to be prominent there. Not only was she worshipped in peoples homes, but the most sacred part of the temple contained implements that represented her.

King Josiah took them from the temple and burned them. If you ever get perplexed at the idea of Nephi associating Mary and the baby Jesus with the Tree of Life, consider the fact (pointed out by Barker) that there was a living tree representing Asherah in the Holy of Holies in the first temple, and that Josiah removed it and had it burned.

The scribes and Pharisees that Jesus reasoned to silence were enthusiastic descendants of those authorized editors to this rejection of Wisdom from Israel.

By walking on water, Jesus sent this message of her legitimacy as a Goddess into those who could see like a wordless lightning bolt straight from Heaven.

So now, two millennia later, what is it exactly that we want from Her if we don’t even apprehend Jesus’ basic messages concerning her?

Perhaps Mormons of every stripe are a little too comfortable in what Carol Lynn Pearson once called “the motherless house”.