After creation,
the Mother needed
to rest. But,
before She slept,
She held the world
to Her skin and
sighed, You
are good.

What "to" vs. "unto" Could Mean to a Veiled Priestess 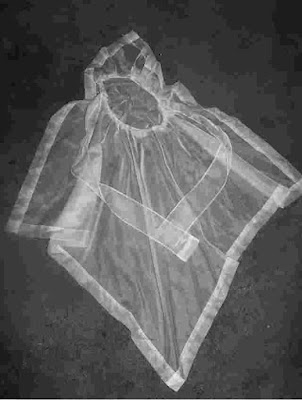 This is probably old hat to many of you, but it occurred to me while meditating on the veiling of women in LDS temples (now abandoned) recently that the meanings of these words are different.

Unto suggests travel. It is a Middle English term that essentially combines the meaning of until and to. It also suggests subordination.

To can suggest either subordination or superiority. But used in close proximity to unto, it isn't likely to suggest the former. When the speaker of a text uses these two prepositions in successive sentences, logic would suggest that unto always infers subordination. The understanding of to thereafter would not include the element of subordination.

With that in mind, reread the following (from this site):

Brethren, you have been washed and pronounced clean, or that through your faithfulness you may become clean, from the blood and sins of this generation. You have been anointed to become hereafter kings and priests unto the most high God, to rule and reign in the house of Israel forever.

Sisters, you have been washed and anointed to become queens and priestesses to your husbands.

Because Brigham Young (and the makeshift LDS leadership at the time) had the endowment ceremony for eighteen months (from the time of Joseph Smith's death to its implementation in the Nauvoo Temple prior to the trek west) the possibility exists that any part of the script could have been changed and/or altered during that period. We know, for instance, that the vengeance oaths were inserted by Young following the deaths of Joseph and Hyrum.

But the question that arises from this is: Does Brigham Young's history and reputation suggest that he would implement "unto" and "to" in this manner? Or in other words, would he deploy "priesthood" as subject to God and then infer that "priestesshood" is either equal to or ≥ that of men?

The hierarchy suggested in this implementation of prepositions suggests something else, too: that the quality of being a priest unto God is in no way, shape, or form necessary to his status as a God. It is simply an offer that he puts on the table, to endow his power to men as a gift. But then the to afterward infers that women have already been endowed with some measure of godly power.

Being a priestess that creates temple bodies with her temple is one thing (only women create. Men provide part of the blueprint, but all mitosis is executed in the womb). Any fertile woman has that power with or without going to the temple. But the endowment here is different: to be "a priestess to your husband", with the understanding of the above explanation of to and unto, infers that a properly endowed woman would be the priestess that performs a saving ordinance for her husband that he can obtain in no other way.

This may help us understand why God, who can create with a word, has the power of creation at all. Christ suggests in his Parable of the Talents that good stewards of creative power here (only women create in mortality) are given mastery of that power in Eternity. Mastery always includes the power to delegate, and God the Father may be utilizing the power of creation delegated to him by God the Mother.

After what I have read on Brigham Young (a man who acted like a heathen god, but also admitted that he had never seen God), I don't think he would intentionally infer (or rubber stamp) these notions in the text of the endowment at all. Meaning that, in my opinion, the "unto" and "to" utilized in the endowment slipped through his edit unchanged.

It makes much more sense for these notions to have come from, or through, the man who insisted that the Relief Society would be "a kingdom of priests as in Enoch's day".

It also makes more sense that women would be veiled instead of men in the endowment.

A lot has been made of the idea that women in various cultures veil themselves at the behest of men. In recent and ancient practices, this may be true as a matter of law (Middle Assyrian, 1400-1100 BC) or enforced regional norms. But all should be reminded that the Koran was written in 609 AD, and that Rebekah veiled herself in response to meeting Isaac around the time of Sarah's death (the Patriarchal Age, approximately 1860 BC).

If the inferences of "unto" and "to" explained above represent anything authentic with regard to the Godhead, then our understanding of Rebekah veiling herself may not be about the local law, societal norms, or any kind of subordination. It may be a show of understood authority (and thereby a confident offer of eternal consequence).

I would never suggest that any woman, having had a negative experience with the veil in an LDS temple, is wrong. Women are intuitive and spiritual beings, and the experiences that they report of their own accord should be taken at face value.

There most certainly is a tradition that suggests that the veiling of women indicates that they are the chattel of men. But to me, all of these patriarchal/misogynist traditions were never of God. Likewise, I think that the LDS tradition has been bastardized by corrupt leaders who altered the Restoration given through Joseph Smith.

My reading of The Mormon Priestess by Liz Hammond is likely as sobering as anyone's. But she erroneously inserts "unto" into the queens/priestesses promise to women in her fourth paragraph. The initiatory and the Welcome and Introduction sections of both the 1990 and pre-1990 versions of the Endowment render that part of the statement the same:

"...queens and priestesses to your husbands."


I think Mrs. Hammond's essay is a very valuable critique, and it should be read by every person who has ever been in a Mormon endowment. She characterizes every female covenant as being made to the husband in question (rather than to God), and that is an element that very much seems to be, to me at least, part of our temple inheritance from Brigham Young.

I find it appropriate that Hammond's essay is collected with Valerie Hudson's essay, The Two Trees, in the book Mormon Feminism (edited by, among others, an old friend of mine, Rachel Hunt Steenblick). I started my own journey through these ideas with Hudson's essay, and I had no critique for it when I published my own book back in 2011. But after reading Hammond some years ago, it struck me that Hudson's theory of complements only works if the men in the church hold up their end of the covenant, and can still constitute a branch of one of the trees in question.

Because as damning as implementing a textual emphasis on subjugating women is, I would assert in tandem that it is just as damning for our ordinances to be limp and unextraordinary in comparison to those we read about in scripture.  Section 84 makes the nature of valid ordinances very plain, and if "the power of godliness" is not in fact manifest in the ordinances, then it is a strong indication that the COJCOLDS has been cut off from The Restoration.

Then the questions that follow concern why Moses and Christ are veiled in scripture, and then why women are veiled in the temple and not men. It would seem that the temple, by veiling women, associates them with our savior and also a prophet in the midst of face-to-face interaction with the Almighty. The absence of veils on men, therefore, would indicate why "unto" is utilized in the male part of the rite.

I do not know anyone who associates Christ's veiling with the notion of him being 'chattel', and Moses' veiling in Exodus 34 was a matter of protecting the children of Israel from his face, which was drenched in godly power.

In the context of the temple, it makes no sense to fall back upon the world's longstanding abuses of veiling as the primary comparison. That is... unless those in power over the current rite have adopted that tradition of abuse.

Out of impure hands, we must view the collective text for what it originally said and inferred. It makes far more sense to associate veiling rites with the instances of veiling in scripture where the power of godliness is manifest. And then it is important to admit that almost the whole of LDS (and other Mormon) leadership since the martyrdom has not only not held that power in any authentic sense, but have also completely misunderstood women within the cosmology of their own rites and texts.