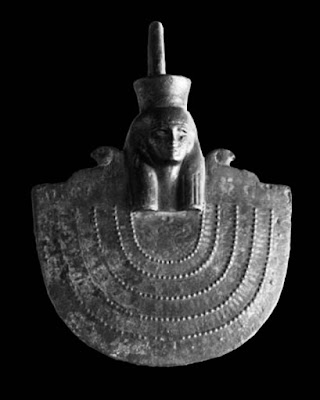 Goddess of fertility, birth, creation, motherhood, war, hunting, weaving, and also a funerary goddess who cared for and helped to dress the souls of the dead. Neith was one of those gods that attended you from womb to tomb.

According to Geraldine Pinch, Neith preceded creation and was present when the waters of Nun began to swirl at her command to give rise to the ben-ben (the primordial mound) upon which Ra (Atum) stood to complete the task. In another version of the story, Neith created the world and then went directly to found her city of Sais, leaving the rest of the work to Atum.

By the time of the end of the Ptolemaic Dynasty Neith was still recognized as a creative force of enormous power who "created the world by speaking seven magical words".

She was closely associated with the creative element of water and was "the personification of the fertile primeval waters" and was "the mother of all snakes and crocodiles" as well as being the "great mother who gave birth to Ra and who instituted giving birth when there had been no childbirth before".

Her annual festival was celebrated on the 13th day of the 3rd month of summer and was known as The Festival of the Lamps. On this day people arrived from all over Egypt to pay their respects to the goddess and offer her gifts. At night they would light lamps which, according to Herodotus, were "saucers full of salt and oil, the wick floating thereon, and burning all night" and even those who did not attend the festival lighted such lamps in their homes, in other temples, and in the palaces so that the whole of Egypt would be illuminated all night long.

These lamps were thought to mirror the stars in the night sky which were claimed to be either deities or paths to those deities. At Neith's festival the veil between the earthly realm and the land of the dead was thought to part and people could see and speak with their departed friends and family members. The lights on earth mirroring the stars helped to part this veil because earth and the heavens would appear the same to both the living and the dead.

Her identification as the most powerful creative force in the universe is noted by Plutarch (c. 50 - 120 CE) who writes that the temple of Neith at Sais held this inscription:

"I Am All That Has Been, That Is, and That Will Be. No Mortal Has Yet Been Able to Lift the Veil that Covers Me".