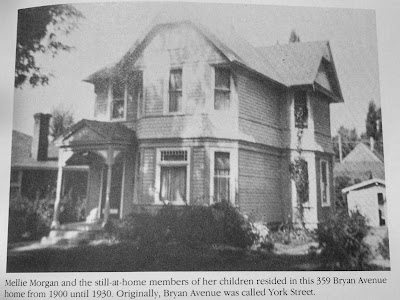 Today's Drive-By Mormon History is from the biography of Nicholas Groesbeck Morgan, The Man Who Moved City Hall by Jean R. Paulson, pp 55-56:

Nick carried a smeared and deeply-creased newspaper clipping reminding him that there was occasional excitement to leaven the poverty and drudgery. It was from the Deseret Evening News of Saturday, January 4, 1896, and proclaimed that Utah had become the forty-fifth state. The lead paragraph of the story, under the headline, UTAH A STATE, and a subhead, THE PROCLAMATION ISSUED BY PRESIDENT CLEVELAND, set forth:

At 9:13 this morning the usual early morning activity at East Temple Street was decidedly disturbed owing to the fact that superintendent Brown of the Western Union Telegraph Company was observed to rush frantically out of the office armed with an old reliable shotgun, the contents of which belched forth in two resounding reports. A small boy in the near vicinity dived for an adjacent doorway, his juvenile brain having grasped the idea that a holdup or bank robbery was in progress.

The story then told how merchants decorated their stores with bunting, that George M. Scott and Cunningham and Co. erected steam whistles outside their doors, that the stars and stripes were strung from the east and west towers of the temple. The Utah National Guard Battery at noon took a position on Capitol Hill and fired a twenty-one gun salute, the booming accompanied by the ragged din of ringing bells, steam whistles, and half-a-dozen bombs set off at the news corner by a junior patriot.

It was a proud moment for the Morgans and the Groesbecks, for the pictures of members of the Constitutional convention, featured during that time, showed Uncle John Henry Smith --twice as large as the others, right spang in the center. And right under his was the photo of that brilliant friend of the family, Brigham H. Roberts.

A quarter of a million citizens of the new state shouted themselves hoarse on that bitter cold day, rejoicing in the victory that had been denied in the attempts of 1849, 1856, 1862, 1867, 1872, 1882, and 1887. Nick had heard both his famous uncle and BH Roberts say that the territory was becoming a state only because LDS Church President Wilford Woodruff had issued the Manifesto (4). Nick had also heard his mother say that Brother Roberts had done himself a "lot of harm" speaking against women's suffrage during the convention in 1895. Everybody flocked to hear BH speak, she said, but the convention adopted the suffrage amendment anyway, 75 to 14.

When the family resided briefly in the duplex after being evicted from the big house, Mellie had told the children about a dream she'd had, in which a great wave had engulfed her as she walked along the seashore, then receded, leaving her safely on shore. This renewed her faith that better days were coming.

That hope was partly realized in 1897, when a Civil War pension she had applied for during the previous year was granted, and with retroactive payments in hand, (at $12 a month) moved her fanily to a two-story frame house at 363 York Street (5). They had been in this home but a day when Shirley Kunkel, a neighbor boy, told 12-year-old Nick of a job in Granger putting up hay for Fred Eldredge and David Lambert.

4. The manifesto was the church president's official declaration that he would submit to laws forbidding plural marriages, and would use his influence with other members of the church to have them do likewise.

5. York Street, which extended from Third East to Fifth East, later was known as Bryan Avenue.
Posted by Senex at 10:17 PM