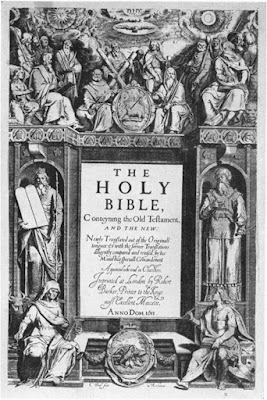 Today's drive-by Mormon history comes from Philip Barlow's book: Mormons and the Bible (Oxford 1991).
---
"When copies of the published work, The Holy Scriptures, began to proliferate in Utah, various leaders of The School of the Prophets in Provo voiced the church's stand against the new revision: "the world does not want this [new Bible]... they are satisfied with the king James translation...."; "The King James translation is good enough... I feel to support the old Bible until we can get a better one."(14)

This sentiment was not universal in Utah, and it was explicitly provisional ("until we can get a better one"), but it was reiterated in later years(15) and it marked the ironic beginning of a conscious stress on the King James Version.

An indirect influence increasing the status of the KJV among the Saints was the general Protestant antipathy to Catholic immigrants. Anti-popery had long flourished in Protestant lands, of course, but the Catholic population in eighteenth century (eastern) America was too small and too localized to incite broad conflict. By the 1820s, however, Protestants were viewing Catholics, who before mid-century would constitute the nation's largest denomination, as a genuine threat to an evangelical America.
...
To some extent, the Mormons participated in this trend. Alienated from the culturally dominant Protestants in so many ways, the Saints might plausibly have identified with the embattled Catholics by defending alternative translations. But most Mormon converts had come from Protestant ranks that assumed the KJV. Moreover, the Saints themselves had inherited a significant strain of anti-Catholicism, and during the course of Mormon history some would identify the pope as the head of "the great and abominable church" mentioned in the Book of Mormon. An occasional Mormon leader even made these drifts explicit, remarking on the worth of the Authorized Version against Roman Catholics who objected to it. (18)
...
In addition to such causes, we must also acknowledge that Mormon loyalty to the KJV was-as it was for many Protestants-simply a natural attachment to the vehicle by which a people felt they had encountered the sacred. A similar phenomenon may be seen in the great struggle Roman Catholics had in producing an acceptable vernacular Bible in America. This love of the Bible "of one's youth" is easily traced in the resistance with which every major new translation , including the KJV, has been greeted. This preservationist impulse will be explored more fully as we look at the later twentieth century, but it was doubtless a factor in earlier decades as well.
...
Even when Church leaders did articulate reasons for recommending the King James over other translations, they rarely asserted that it was more accurate. They supported it primarily because they suspected the RLDS production of Joseph Smith's revision, or because they believed the elegant familiar version had "taken too firm a hold of the popular heart" to forsake it.(23) Sometimes, in fact, they highly praised modern translations, offering only an appended tolerance for those who would continue to prefer the familiar version "because they have become accustomed to its lofty phrases."(24)

15. Apostle Charles Penrose's 1881 assertion was typical. The Church would use the Authorized Version, he said, "until the inspired... revision commenced by the prophet Joseph Smith shall have been completed in a form acceptable to The Almighty..." ("The Revised Scriptures", Deseret News, April 22, 1881)

This suspicion of the "Reorganite" production of Smith's biblical revision was still apparent in the Utah-based church as recently as the early 1970's, after which it rapidly faded. See, for example, Mark E. Peterson, "As Translated Correctly" (Deseret Book, 1966) pg. 30, and an unsigned editorial in The Church News November 14, 1970 pg. 16. The change was evidenced quite publicly when another CN editorial (Nov. 16, 1974) expressed deep reservations about the "Inspired Version", but was followed (Dec. 7) by a tactful correction that amounted to a retraction. In contrast to all of this, the Reorganized Church began in the nineteenth century its current practice of using Smith's Inspired Version as its primary Bible.