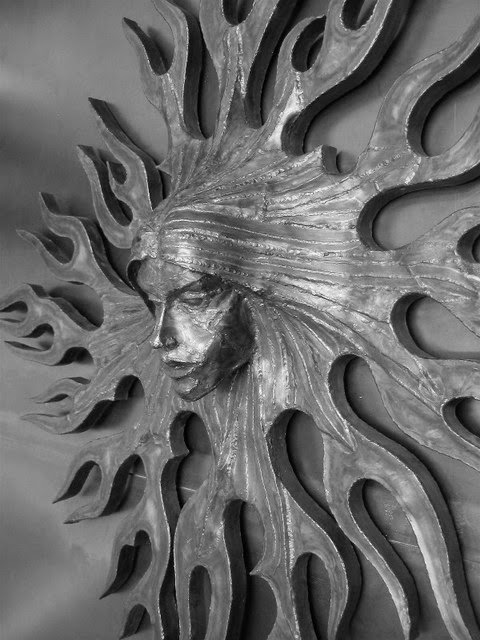 Relation is reciprocity. If there is no exchange between two parties, then there is no relationship to speak of.

Do you understand The Priestess Queen? She is Heavenly Mother. Do you know the meaning of those words, "priestess" and "queen", as they pertain to her reciprocal relationship to her husband, and to her godhood? To understand her better, it is necessary to look to the gods, scriptures, and rites that we are familiar with.

The first concept to understand is that all queens are sovereigns. A sovereign is a master who rules with power. In the world, sovereignty has often been a matter of blood inheritance. But the Kingdom of God only honors inheritance within the context of the law of the harvest, wherein individuals are first stewards who prove themselves before being made rulers. Examine Matt 25:

21 His lord said unto him, Well done, thou good and faithful servant: thou hast been faithful over a few things, I will make thee ruler over many things: enter thou into the joy of thy lord.


Did you see what happened there? Good stewardship over a few things translated into sovereignty over many things. There is vast power to be gained by submitting to the terms laid out by God in scripture and in ordinances, and it simply cannot be had in the ways power is traditionally gained in the world (by blood relation, or by the sword).

17 And if children, then heirs; heirs of God, and joint-heirs with Christ; if so be that we suffer with him, that we may be also glorified together.


Okay, so now we are beginning to understand the requirements for obtaining this power. If we are to be joint-heirs with Christ, we must be be joint-sufferers also. Meaning that we must submit to anything God sees fit to inflict upon us, and also meaning that anything suffered is suffering unto godly glory. The first beatitude reads:

3 Blessed are the poor in spirit, for theirs is the kingdom of heaven.

3 Yea, blessed are the poor in spirit who come unto me, for theirs is the kingdom of heaven.


Who in the world is going to come unto Christ? Do you think that the rites that we participate in within our churches and temples will be enough to get us there? Examine these two verses from Section 76:

Joseph Smith spoke of this difference. It can be found in Teachings of the Prophet Joseph Smith:

I would exhort you to go on and continue to call upon God until you make your calling and election sure for yourselves, by obtaining this more sure word of prophecy, and wait patiently for the promise until you obtain it. (p. 299)


Joseph isn't talking about something that happens after you are dead. It is imperative to receive your Calling and Election in this life, which has everything to do with you receiving power (priestess, priest) and becoming a sovereign (queen, king). Examine D&C 88:

68 Therefore, sanctify yourselves that your minds become single to God, and the days will come that you shall see him; for he will unveil his face unto you, and it shall be in his own time, and in his own way, and according to his own will.

1 Verily, thus saith the Lord: It shall come to pass that every soul who forsaketh his sins and cometh unto me, and calleth on my name, and obeyeth my voice, and keepeth my commandments, shall see my face and know that I am;

4 Wherefore, now after I have spoken these words, if ye cannot understand them it will be because ye ask not, neither do ye knock; wherefore, ye are not brought into the light, but must perish in the dark.
5 For behold, again I say unto you that if ye will enter in by the way, and receive the Holy Ghost, it will show unto you all things what ye should do.
6 Behold, this is the doctrine of Christ, and there will be no more doctrine given until after he shall manifest himself unto you in the flesh. And when he shall manifest himself unto you in the flesh, the things which he shall say unto you shall ye observe to do.


Hopefully, you are beginning to see a pattern for how a woman is to obtain priesthood. The temple and its ordinances help us understand both of our heavenly parents in ways that few ever really engage. Please reflect on the following:

1. If women are dressed in the symbolic robes of the Priesthood during the Endowment, preparatory to officiating in the ordinances of the Aaronic and Melchizedek Priesthood, then it follows that Heavenly Mother has been dressed in the actual robes of the Priesthood, and thus placed into a role that is no longer preparatory. Hence, she officiates in the actual ordinances of those priesthoods in conjunction with her husband because her stewardship qualified her to become the sovereign that she is now.

2. We know that mortal women are stewards over creative powers that men do not possess. However we also know from the scriptures that God the Father and Jesus Christ can create the universe, and the earth upon which we exist, with their words. The primary difference between these male gods and mortal men is their glory. But what is it that grants them creative power? Logistically speaking, the most clear difference between God the Father and men is that He is married to a goddess that is no longer a mere steward over creative power, but a fully fledged sovereign over it.

Hence, if Christ is the creator that scriptures proclaim him to be, and if God the Father is able to direct the creative process, then it is likely with Her power (and Her permission) that they are able to exercise that power. So they also, through good stewardship, have been made "rulers over many things".

If you want to understand who and what Heavenly Mother is, simply imagine God the Father attempting to execute the creation without Her.

Men are not stewards over creation while in mortality. Spermatozoa contain half of the necessary genetic code just as ovum do, but it is the womb that executes all of the temple body construction once the blueprint DNA has been established by their unification. It is women that create.

No stewardship = no sovereignty. Men are offered the opportunity to participate in the salvation of those who have been created through Christ's veil discussed here. If they do not serve well, then they bring nothing to the marriage table with which to be a reciprocal bridegroom.

So our heavenly parents share with each other these respective powers in an act of reciprocity that few comprehend. Creation and Salvation. Their marriage unifies these powers and makes them what they are in a way that is impossible without either party. Through stewardship, they have obtained the sovereignty required to delegate power to each other and to their children. No sovereignty = no actual power to delegate.

If you are truly interested in Priesthood power, then this sovereignty should be an important enough concept to begin inquiring about. I pray that you will be knocking on the correct door.
Posted by Senex at 11:57 PM