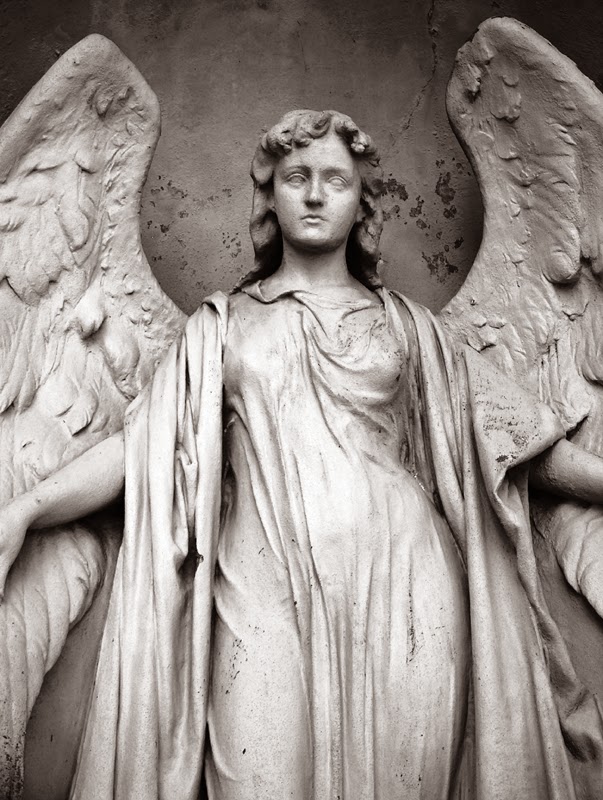 Power always resides at the gate. And this is why we often find ourselves at one gate or another, asking for entrance. Asking to partake.

Food. Raiment. Material. Money. Technology. Information. Endowment. Atonement. All of these wait behind some barrier, and you want them. You want their power, so you make the trip to put your hands on those doors and push them open.

That's what this world is. It's a pushy power grab. A black Friday shopping spree. An agitation to either obtain power, or to increase upon what we already have.

A few weekends ago, some LDS women associated with the Ordain Women movement found themselves denied entrance at the gate of the LDS Conference Center in downtown Salt Lake City. In this instance, they were not asking for ordination per se, but rather entry into what has traditionally been understood by our religious culture to be male space. Specifically, the Priesthood Session of our semi-annual General Conference.

In a strange paradox of events they were denied entry to the meeting, publicly reprimanded by the Church's Public Affairs department, and subtly offered the very ordinations that they seek within the very meeting that they were attempting to enter.

Dallin H. Oaks' began that meeting with a talk that included the following:


"We are not accustomed to speaking of women having the authority of the priesthood in their Church callings, but what other authority can it be? When a woman—young or old—is set apart to preach the gospel as a full-time missionary, she is given priesthood authority to perform a priesthood function. The same is true when a woman is set apart to function as an officer or teacher in a Church organization under the direction of one who holds the keys of the priesthood. Whoever functions in an office or calling received from one who holds priesthood keys exercises priesthood authority in performing her or his assigned duties."

This conflation of powers may not seem like a victory for OW at first blush, but parsed out carefully this and other statements Oaks made essentially lay out the red carpet for women to, at some future junction, argue their way into the authority to baptize, participate in the sacrament, and enter the hierarchy of the institution. Simultaneously, Oaks' talk lays the groundwork for the church to hand all of these things over without argument.

If there is no difference in the authority by which women perform their current set of callings, then what, exactly, is preventing them from participating in the other duties associated with that authority? Their lack of maleness? What Oaks' conflation sets up is a system where de facto ordination opens up the doorway for participation in any of the ordinances and administrations that are typically performed by men. And then if participants, then why not ordained holders of that authority? Why not key holders?

As attorney Denver Snuffer points out, Oaks is essentially laying out multiple steps towards ordination rather than just handing it over outright. The danger here is that Oaks is operating on a massive assumption regarding women's participation in ordinances and in the church in general.

The Facts of the Status Quo


Hereafter I am going to speak of elements of temple worship. I will not be disclosing anything that I have covenanted not to, but this is your chance to stop reading if you feel that everything in there is unmentionable.

While it is true that women perform ordinances in the temple and use the words, "Having authority...", it is never spelled out what authority is being referred to. Most simply assume that this declaration speaks of male priesthood, when in fact it is never identified.

As if the Melchizedek Priesthood should be treated as the only godly power at play in the universe, Oaks asks, "...what other authority could it be?", and with a shrug he pushes forward with an assumption that is akin to presuming that God the Father obtained nothing from his marriage to Heavenly Mother that he didn't already have.

This assumption flies in the face of some very plain facts concerning our ordinances and doctrine. Specifically:

1. Women are never ordained to either the Aaronic or Melchizedek Priesthoods prior to their entry into the temple.

2. Women are likewise never ordained to either of the male priesthoods while in the temple.

3. A "setting apart" for a calling is not an ordination.

Point #1 is clear. If you disagree, then please correct me in the comments below.

Point #2 is cleared up by the fact that the robes of the priesthood in the temple are no more the actual robes of the priesthood than the "veil" that separates the Terrestrial and Celestial rooms is the actual veil of Jesus Christ. That lady with the beehive hairdo isn't really Eve, and that skin-care CEO in a white suit isn't actually Elohim. These are all just symbolic stand-ins for the real thing, and are intended to lay out a template for adherents to pursue their actual Calling and Election as described in John 14, ll Peter 1, ll Ne 32 and D&C 93 and 88. This is pointed out clearly at the beginning of the ceremony:

"Brethren and sisters, if you are true and faithful, the day will come when you will be chosen, called up, and anointed kings and queens, priests and priestesses, whereas you are now anointed only to become such. The realization of these blessings depends upon your faithfulness." (emphasis mine)

34 Behold, there are many called, but few are chosen. And why are they not chosen?
35 Because their hearts are set so much upon the things of this world, and aspire to the honors of men, that they do not learn this one lesson—
36 That the rights of the priesthood are inseparably connected with the powers of heaven, and that the powers of heaven cannot be controlled nor handled only upon the principles of righteousness.

Some doors can be pushed, but not this one. This door requires a knock.

There is no one that walks out of the temple a bona fide king, queen, priest, or priestess by virtue of having participated in the endowment. So don't pretend. Being chosen and called up as such is a matter to be taken up with the Almighty, not with dudes who run this very Telestial and temporary institution.

Yes, I am aware of and versed in the Second Anointing. No, it is not the equivalent of one's Calling and Election. We are still talking about a rite performed in robes that are not the actual article, the first part of which is performed by a mortal man who is not a member of the Godhead. So the Second Anointing is not the same thing as one's C&E. This is simply another temple rite performed with the hope that individuals will receive the real thing through what the scriptures identify as The Holy Spirit of Promise.

Do you want a revelation that will allow you to exercise power? Then read your scriptures, and follow what they instruct. Follow what you are instructed to do in the temple, and receive this revelation yourself. You don't need mortal men to broker something that only a god can give you.


These words pertain to each of us and our personal relationship with Christ. They pertain to the second tree, not to the first. The tree seen in vision by Lehi and Nephi. When taken within the context of Christ's most prominent message, those words concern your ability and fleeting opportunity to engage Him face to face. It does not concern women going through middle men to obtain His power.

4 Wherefore, now after I have spoken these words, if ye cannot understand them it will be because ye ask not, neither do ye knock; wherefore, ye are not brought into the light, but must perish in the dark.
5 For behold, again I say unto you that if ye will enter in by the way, and receive the Holy Ghost, it will show unto you all things what ye should do.
6 Behold, this is the doctrine of Christ, and there will be no more doctrine given until after he shall manifest himself unto you in the flesh. And when he shall manifest himself unto you in the flesh, the things which he shall say unto you shall ye observe to do. (emphasis mine)


On what door are you knocking, OW? I ask sincerely. If God has ushered you to this agitation by direct revelation, then I salute you. I have no problem with John the Baptist, or Abinadi, or Samuel the Lamanite arriving from outside of the hierarchy with a message from God to repent. But if you are not operating on revelation now (there is no declaration of such on the Ordain Women website), then why should I believe that you will suddenly be doing so once you are ordained?

I think the move that you are making now was inevitable the moment that Apostle Harold B. Lee wrested control of your organization away from you in the '60s while David O. McKay was essentially an invalid. I think the Relief Society was the oldest women's organization in the United States until that moment, and I also think that many of the nauseating abstractions that have been foisted upon women and girls concerning their lives and roles by the institution since Joseph was put in the ground have been unhelpful at best, and destructive on the whole. But despite all of those grievances, I think OW is responding by knocking on the wrong door.

Verse 4 above says that if you are not brought into the light, that you must perish in the dark. So this choice is no joke. I'm not going to pretend that the institution is spotless or correct about everything, just as I will not pretend that First Wave feminism is the same thing as the Third Wave. But if I am going to be honest about our religious institution, then I am also going to be honest about feminism. It has a Second Wave. It is that wave that embraced the notion of going to war with patriarchy as a standard operating procedure, and it is that aspect of feminism that the OW movement reflects in its MO.

If you are preoccupied with the Tree of Knowledge of Good and Evil, you will never even think about the Tree of Life. If you are to complete the journey that is begun in the endowment, you must knock on the correct door.

Point #3 is also self evident. Look up all of the ordinations in the scriptures, and tell me where there is a precedent that suggests that getting set apart is the equivalent of an ordination. The official name of the priesthood in question is The Holy Priesthood after the Order of the Son of God. If that sounds like something that is handed out like candy without ordination, it should be pointed out in scripture for everyone's benefit. A de facto ordination is simply not scriptural, nor is it likely what happens when women participate in ordinances or fulfill their callings.

Quite frankly, if women are never ordained to the male priesthood before they enter the temple or while they go through it, then the greatest likelihood is that they already possess authority before they ever even learn to say the word "appendage". Hence, when they say the words "Having authority..." while performing washings and anointings, the statement is true because they were ordained (not by men) prior to their involvement with the temple. I.E., women have their own authority, and it has nothing to do with males of any glory.
Posted by Senex at 7:56 PM