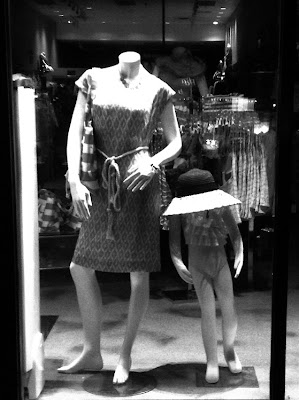 If the womb is a veil, then the focus on a woman's surface is a distraction from the real power.

There is a war going on in the world over the souls of women and girls. It is an old war, and by and large it has become an info war. The information being broadcast is that a woman's visual allure is primary in establishing her worth. The standard for what is considered beautiful and desirable is set by high fashion, deployed by mass media, and the war is waged locally at shopping malls. The range of acceptable body types is narrow.

The war costs money, and it spills blood. It sacrifices the mental well being of children and teens who are not fully developed. It demands that anorexia and bulimia be imposed upon healthy temple bodies. It drags women into plastic surgery offices so that those temples can be altered to resemble the bodies seen in the popular cult. It causes mothers to unconsciously pass on an inheritance of vanity and idol worship to their daughters.

When a girl is born, what future do you expect for her? Do you envision her rising above this slaughterhouse nightmare of what Babylon asserts is the meaning of womanhood? If you go to the effort to observe the lives of women and girls, you will see that all are caught up in this power struggle to one extent or another. None pass through it unscathed. But for those who survive with a healthy sense of self intact, what makes the difference?

One powerful tool to pierce this veil of deception is a testimony in the Atonement of Jesus Christ, who's words cut through all of the lies and plastic of the popular ideal. This theory about the womb is simply another outgrowth of His words and ministry.

His statement that the body is a temple changes our understanding of this info war. If the womb is a veil, then a woman's primary power is not on her surface. It is within her Holy of Holies, which allows her the potential for mothering an entire race.

If you think that motherhood is boring or powerless, then you do not recognize temple creation and veil stewardship for what they are. You are being deceived, and a lie that works annihilates just as effectively as a nuclear warhead.

The shape of a mannequin, that you see in a retail store, is a lie. It is displayed as an example, but most of the women that encounter it do not have a body that resembles it. When you walk up to one while you shop, you should recognize the real difference. A mannequin has no womb, and no spine. It stands on the structure of its mold, and is often held up by a steel rod. It's power is completely embodied in its surface.

The above picture is not of a mother and daughter; rather it is an effigy of that relationship intended to place it within the context of the store's brand. The figures have been posed, but the effect is that actual women and girls pay money to follow suit. Their apparent success has multiplied their numbers, as millions of mannequins now affirm the beauty ideal represented by a very minute cult of models and actresses that rule pop culture.

Thinking about the mannequin should bring the realization that most of the bodies that are deployed in this info war are not real. This extends to bodies photoshopped in magazines and seen on TV/computer/cinema screens.

It is easy for most women and girls to keep their cool around mannequins and false images while they are in the store. The difficulty comes in the morning while looking in the bathroom mirror.

If the body is a temple, then it is a house of covenant. What this means is that those things consumed and inserted into the body create covenants. Whatever you eat or use on your surface, you become one flesh with. Your body is the instrument of your spirit, and the two together make up your whole soul (D&C 88:15). So your body choices perpetuate brands and perceptions to others who observe you.

I cannot go into all the ways that one can change the body through surgery, masking, and other means, but if they lead to a girl or a woman submitting to the plastic ideal discussed above, then I would preach caution. Cult worship changes a temple from one that is the middle ground between Heaven and earth to one that is the middle ground between a woman and the ideal that they are selling.

To affirm the plastic ideal with your very body makes you one in purpose with the disinformation being fed to other women and girls. If others follow your lead, then the mannequin (and all other fake bodies) are affirmed and  accommodated in the info war. The result of profane covenants is harm to the self and to the community. If the ability of our communities to recognize the true power and worth of a woman is subverted, then the originator of the deception wins.

A war produces warriors. Christ has asserted that if you live by a weapon then you will perish by it.

A woman is not meant to be an action figure, worshiped for a season, dressed in multiple outfits for various fantasies, and then ultimately discarded into a thrift store bin when it is outgrown. A woman is meant to be an ancestress and an eternal queen. If the womb is a veil, then it is the threshold where this higher destiny is to be realized.