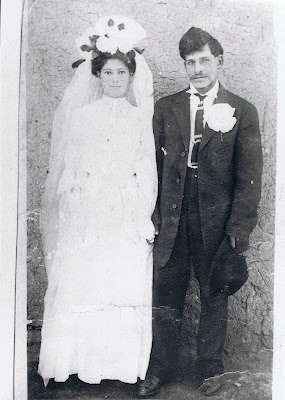 Looking like they stepped out of a 1960s spaghetti western, these are my great grandparents. Maria Louisa Maez (eighteen at the time) and Jose Liborio Garcia (twenty three).

This picture is from 1910, and I remember thinking the first time I saw it that it appeared that my great grandfather had just married a ghost... as Louisa's feet are difficult to discern beneath her wedding dress. Nevertheless, my great grandmother bore five girls and two boys. And Liborio caught all of them.

I didn't start asking about him until I had already finalized the chapters that would make up the first version of The Veil Worker. It turns out that my own interests in birth and the womb are actually the continuance of a family tradition.

The first birth by Louisa was in 1911, my grandmother's sister Sylvia. The doctor arrived, and was apparently flustered by the large area that he had to cover as a birth doctor in south-central Colorado. So when he saw how observant and interested Liborio was in the birthing process, he trained him on the spot to be a midwife.

One catch was the qualifying test of his training. The doctor wrote out his license on a piece of note paper, signed it, handed it to him, and informed him that he would cover Saguache County. Shortly afterward this expanded to parts of Monte Vista County. So began an unusual side job for a quiet man accustomed to farming and sheep herding... male doctors might be common, but males aren't exactly a dime-a-dozen in the history of midwifery.

As word spread around, the calls came often. Liborio was trusted by everyone, and with good reason: he never lost a mother or a child. No one knows the exact time frame in which he continued to work as a midwife, but it is known that he delivered my uncle Santiago in 1935, and Santiago's cousin Dorothy in 1938. So that is at least 27 years (from 1911) of deliveries before hospitals began dominating births... and likely hundreds of babies. According to my grandmother he would turn breeches by hand, and he went to great lengths to make the birth room private so that mothers could keep calm.

I wish there was a journal somewhere of his work as a midwife. The fact that he did this informs the other fragments that I know about his life in interesting ways. One story that is essential with regards to this man is that my other great grandfather on my mom's side (Abel Filipe Salazar) pulled a bit of a fast one on Liborio when my grandparents were married in 1935.

In those days, the parents of a prospective husband would visit the father of the young woman in question and ask for her hand. Abel did this as per the custom. But one thing he didn't immediately mention is that they (the Salazars) were Mormons. Liborio was a life-long Catholic. When the Salazars arrived to take my grandmother (Della Garcia) to the church, they didn't say a word about which church they were going to. Maria Louisa had already passed of pneumonia years earlier. So Liborio accompanied the wedding party alone to the town hall in Alamosa, CO to get the marriage license, and then to the church... which turned out to be an LDS ward chapel.

It was at this point that Abel informed the Garcias that his family was LDS. Flummoxed, Liborio pulled my grandmother aside and asked her if she was okay with marrying a Mormon. She said that she didn't care, but the truth was that she didn't even know what Mormonism was or meant. Likely sensing this, Liborio turned again to the Salazars and informed them that he raised his children to do whatever they choose. If the Salazars agreed that they would never coerce her to become LDS, and never press her to go to church with them, that he would allow the wedding. They agreed, and the ceremony took place in the chapel while he waited in the car.

When the bride and groom exited the chapel, my grandmother walked to her father and knelt on the ground before him. She was accustomed to receiving father's blessings from him whenever she would go to the local dances or on a trip, and she wanted his blessing for her marriage. “I am not a rich man", he said in his blessing. “The one thing I give to you is the Catholic church."

The Salazars, to their credit, lived by their word and never even talked about the church to my grandma. My grandfather told her that if she wanted to know about the church that she could investigate it on her own, which she did after they were married.

This point is important to me because the respect paid to my great-grandfather by my grandfather and his father meant that my grandmother retained her religious freedom. Of course he probably preferred that she stay Catholic, but he didn't make any demands in that direction, either.

My Grandmother remained Catholic for many years out of respect for her dad. After my grandparents moved to Salt Lake City in 1958 she attended church sparsely with my grandfather and some people thought she was already LDS. When her sisters would visit, she would attend the catholic church with them. She had met with the missionaries several times, but she feared to join the church because she felt that her family would disown her. It was not until my aunt Sarah, who had always been an active Mormon, decided to go on a mission in 1960 that my grandma got serious about joining the church. She wanted very badly to go to the temple with her daughter.

Before Sarah left on her mission, my grandmother invited everyone in the family to meet her at the Tabernacle one Saturday afternoon. Few knew what was to transpire. She led them to the font that is located on the west end of the Tabernacle, and was baptized a member of the church before a stunned and elated family. Present was Robert Burton, the first missionary who had taught her back in Colorado six years earlier, but she demanded that they find the tallest and strongest man they could find (which turned out to be a man named Carlton Anderson) to baptize her. Burton was hurt by this, but she told him he was too small and she was scared of the water.

Following her baptism, it appears that some of her Catholic family did disown her for a short time. According to Sarah, her older sister (the aforementioned Sylvia) flew out to Salt lake City to disown her personally. But Liborio was silent on the matter. When my grandfather died in 1968, her sisters called her and said that now that Carlos was dead, she could go to the priest at the local Perish and ask to come back to the Catholic church. By this time she had become a regular attendee at both church and the temple. She was endowed, and was sealed to my grandfather by David O. McKay himself. She told her sisters that she was going to remain LDS, and this time they dropped it without any threats of disowning. Through all of this, my great-grandfather remained a silent observer. He never uttered a word of dissent or sanction to her. This continued until his death in 1977.

However my great-grandfather may have felt about my grandmother's Mormonism, he held true to the standard he established of respecting her autonomy. The blade of giving her a choice in the matter cut both ways, but he gave her the latitude to exercise that freedom throughout her life.

Every midwife I have ever spoken with has always identified the tremendous power that mothers wield in that moment of birth... that moment of truth. If Liborio witnessed that power hundreds of times in the farming communities that made up his native part of Colorado, then I can't help but wonder if his experience with midwifery informed his approach with giving his daughters their agency.

My grandmother remembers him as a very deliberate man who always sought out both sides of a story, and who was very fair in his judgments. He shaved and wore a white shirt with a vest every day of his adult life, and always smelled of Cuban cigars and liniment. He was always more of a listener than a talker. He read the Bible to his children every night of their childhood.

In addition to farming, sheep herding, and midwifery he was a carpenter who built his own home, and a photographer who owned three rag-top cameras. Even as an aging man he traveled far from his county to work with migrant workers in the summers.

I was three years old when he passed away in Salida, Colorado. Unfortunately, I never met him. But I feel some affinity for him as I write this. Many of the souls that he helped bring into this world are now aged, or with him in the next one. My grandmother is 98 now, and soon to join them.

He was a man saturated in birth stories, and a veil worker as much as any Mormon.
Posted by Senex at 7:08 PM